Alejandra Campoverdi lives at the intersection of disparate cultures, identities, and experiences – from welfare to the White House. This perspective informs her deep empathy and insight as an advocate on issues including social mobility for first-generation young people and disparities in the diagnosis and treatment of breast cancer.

Campoverdi grew up in Los Angeles, where she was raised by a single mother who had recently immigrated from Mexico. As a result, she experienced firsthand issues she later tackled in her career — lack of access to health care, disparities in educational opportunity, and financial instability. Relentlessly driven to disrupt cycles of generational poverty, Campoverdi took on financial aid to attend the Annenberg School for Communications and Journalism at the University of Southern California and then Harvard’s Kennedy School of Government for her Master in Public Policy.

Campoverdi served in the Obama White House for four years, initially as Special Assistant to the Deputy Chief of Staff for Policy and later as White House Deputy Director of Hispanic Media. As the first-ever person to hold that role, she developed the Presidential communications strategy directed towards the nation’s Latino community. Following her run for U.S. Congress in 2017, Campoverdi and two of her former White House colleagues launched the Pod is a Woman podcast, a weekly conversation about politics named one of the best political podcasts by Time magazine.

An influential women’s health advocate and breast cancer survivor, Campoverdi underwent a double mastectomy as a BRCA gene mutation carrier. Reflecting that “sometimes you choose the issues you care most about, and sometimes they choose you,” Campoverdi advocates for health access and empowerment, resulting in her appointment to the Medical Board of California by Governor Gavin Newsom. In addition, she produced the PBS documentary Inheritance, which follows the surgical journeys of three women genetically predisposed to breast cancer, including Campoverdi herself. Inheritance aired nationwide and was named one of the “Best Documentaries of 2020” by Elle magazine.

She serves on the Boards of Harvard’s Shorenstein Center on Media, Politics, and Public Policy, the Friends of the National Museum of the American Latino, and the California Community Foundation. She previously served as a Commissioner for First 5 California, and on the Board of the Harvard Journal of Hispanic Policy.

Campoverdi and her advocacy have been featured in The New York Times, The Washington Post, The Los Angeles Times, Time, Glamour, Cosmopolitan, and The Today Show. A sought-after speaker, Campoverdi has appeared at numerous colleges and universities, women’s and health organizations, national nonprofits. In her conversations, firesides, and keynotes, she shares her journey from welfare to Harvard, intimately reflecting on the realities of social and economic mobility faced by first-generation young people. Her advocacy of agency around one’s own life and health, and expanded access and equity in healthcare, present a framework for progress that inspires action.

Alejandra Campoverdi uses her personal experiences as a Latina raised by an immigrant single mother to illustrate the unspoken realities of social mobility and the journey to become a cycle breaker in one’s family and community. Campoverdi shares raw and candid examples from her own life in a talk that is equal parts inspirational and motivating, particularly for first generation young people. At the same time, she offers insight into cultivating diverse and inclusive frameworks and workplaces for engaging disparate perspectives for better outcomes.

In this lecture, Alejandra Campoverdi chronicles her journey as a BRCA hereditary cancer mutation carrier and the surprise breast cancer diagnosis she received post-double mastectomy, which was the subject of her 2020 PBS documentary Inheritance. There has never been a time in Campoverdi’s life when breast cancer was not present – her great-grandmother, grandmother, mother, and two aunts have all battled the disease. But Campoverdi’s tale of having agency in the face of seeming inevitability, is a testament to empowered health and healing. In addition, her insights into preventive genomics and data-driven healthcare reveal a new framework to understand the revolution taking place through precision medicine.

I Beat Breast Cancer Before I Even Knew I Had It

Column One: Breast cancer stalked every woman in her family. She was determined it wouldn’t get her

Alejandra Campoverdi is Running For Congress. And Facing Down the Threat of Cancer. 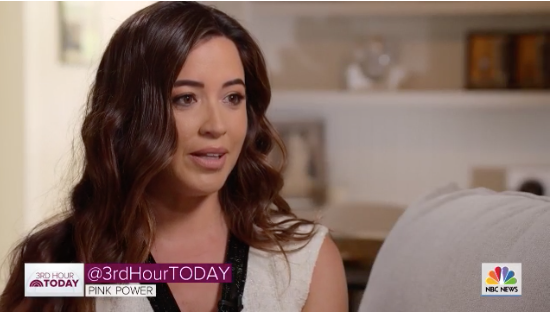