Felicia Day is a professional actress, producer, and bestselling author who is known as one of the most influential creators in new media.  She is best known for her work in the web video world, behind and in front of the camera. She co-starred in Joss Whedon’s Internet musical Dr. Horrible’s Sing-Along Blog, which was ranked in the “Top 10 Best TV of 2008” by Time Magazine, Entertainment Weekly and People Magazine and won an Emmy in 2009. She also created and starred in the seminal web series The Guild, which ran for six seasons. The Guild won numerous awards for web video excellence, garnering a PGA nomination for best web series in 2011. She expanded the brand into numerous merchandizing opportunities, including a hit comic book series with Dark Horse Comics.

Day is the author of two New York Times bestselling books, You’re Never Weird on The Internet (Almost), and most recently, Embrace Your Weird: Face Your Fears and Unleash Creativity. Through her writing, Day openly tackles issues including addiction, anxiety, and depression —and how she reinvented herself when overachieving became overwhelming. In Embrace Your Weird, Day shares personal stories and hard-won wisdom that incorporates revelatory exercises focused on empowerment, creativity, and the power of self-expression.

In 2012, Day created a YouTube channel and production company called Geek & Sundry. Since its launch, the channel has garnered over 2 million subscribers on YouTube, and over 500,000 on the live-streaming platform Twitch. In 2014, the company was sold to Legendary Entertainment to produce content alongside Chris Hardwick’s Nerdist Industries, with Day retaining creative control.

In addition to working on her own creative projects for television and the web, she also has recurring roles on the CW show Supernatural, and the SyFy series The Magicians. In April 2017, she began appearing as Kinga Forrester in Mystery Science Theater 3000. She streams on Twitch weekly and produces a weekly personal podcast called Felicitations!.

Praise for Embrace Your Weird:

An empathetic read in dealing with anxiety, fear of failure, and constructive (or not so constructive) criticism. (Entrepreneurs, startup founders, young professionals, and creative professionals would be wise to pick this book up.)”

A creativity guide that positively vibrates with [Day’s] bubbly comedic sensibility. . . . She writes, ‘Playfulness is the root of all creation.’ Her book delights in manifesting that idea.”

Praise for You’re Never Weird on the Internet (Almost):

[An] inspirational comic memoir . . . to set alongside Tina Fey’s Bossypants, Amy Poehler’s Yes Please, Mindy Kaling’s Is Everyone Hanging Out Without Me?, Lena Dunham’s Not That Kind of Girl and Sarah Silverman’s The Bedwetter. Young people of both sexes and every gender should find much to empower them. (Older people, too, for that matter.)”

Felicia is a lot of fun, and so is her book.”

At last, You’re Never Weird on the Internet (Almost) reveals the secret origin story of everyone’s favorite geek super heroine! Felicia Day’s memoir is honest, hopeful, and hysterical. It’s the story of a girl who grew up lost and lonely—then became a self-made internet rock star. Reading it will make you feel like you can take on the whole Empire yourself.”

Relentlessly funny and surprisingly inspirational to anyone who grew up a geek and continually doubts themselves to this day. That’s a pretty wide audience, if I had to guess. . . . Day’s fans will obviously like the memoir, but it has more than niche appeal. It’s not meant to be a self-help book, but I found that’s the effect it had on me all the same.”

‘Supernatural’ Actress Felicia Day On Leaning In To Your Weird

NYCC 2019: Felicia Day Wrote a Book for the Super Nerd in You 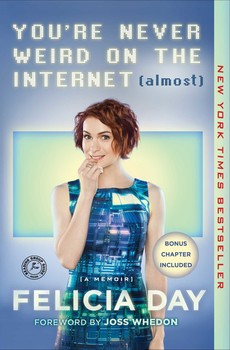 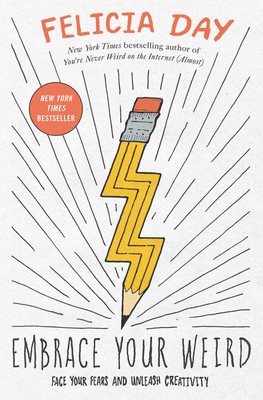