In government, academia, private sector, and media, Juliette Kayyem is one of the nation’s leading experts in homeland, national, and cybersecurity. She has spent over 15 years managing complex policy initiatives and organizing government responses to major crises in both state and federal government.

A nearly nightly analyst on CNN, Kayyem is able to describe and analyze complex international and domestic security issues in an accessible manner that engages audiences worldwide. At Harvard’s Kennedy School of Government, she is the Belfer Senior Lecturer in International Security where she teaches in homeland security, terrorism, and crisis management (the school’s most popular course). In addition, she is a strategic security advisor to major companies on cybersecurity, risk management, mega-event planning, and infrastructure protection.

Kayyem served as President Obama’s Assistant Secretary for Intergovernmental Affairs at the Department of Homeland Security where she handled crises and disaster response, while also serving as the Department’s lead for major initiatives in cybersecurity planning, climate change adaptation, and community resiliency. She is the recipient of many government honors, including the Distinguished Public Service Award, the Coast Guard’s highest medal awarded to a civilian. Before that, she was a member of the National Commission on Terrorism and served as the first homeland security advisor to the state of Massachusetts.

A prolific writer — her columns appear regularly in The Washington Post and cnn.com — in 2013, she was named the Pulitzer Prize finalist for editorial columns focused on ending the Pentagon’s combat exclusion rule against women, a policy that was changed that year. She is also a weekly featured analyst on WGBH, Boston’s NPR station.

Kayyem is the author of Security Mom: My Life Protecting the Home and Homeland, a lively and fast-paced personal account of marriage and motherhood set against the backdrop of a high-stakes career in national security. In recounting the milestones that have marked her unpredictable, daring, and ultimately relatable life, Kayyem reveals that homeland security is not simply about tragedy and terror; it is about parents and neighbors and what we can do together every day to keep each other strong and safe.

A graduate of Harvard College and Harvard Law School and the mother of three children, she is married to First Circuit Court of Appeals Judge David Barron.

Security Mom could not be a more timely or engaging read. As both mother and homeland security expert, Kayyem weaves together stories that any parent can relate to with a larger and essential point. It is time for Americans to take responsibility themselves for securing their homeland, doing our part as citizens to make us a self-reliant and resilient nation.”

A unique, personal and readable story about a compelling issue that touches all American families. Whatever your views on security policy, Juliette Kayyem provides important insights into the question: ‘Are we safe?'”

Insightful, honest and with no shortage of humor, Kayyem’s memoir may prove — beyond any government accounting or historical analysis — the most lasting contribution to explaining America’s security efforts and engaging our communities for the challenges we will certainly face. She brings it home for all of us.”

[A] lively debut…Kayyem bolsters her own story with real-life case studies, from the 9/11 terrorist attacks to the Boston Marathon bombing (nearly in her own backyard), and plenty of enthusiastic ‘can-do’ advice…Kayyem identifies with and is a leading voice for the worry-prone parents who will most appreciate her memoir.”

“Trump Is the Problem. The Organizational Chart Doesn’t Matter.”

“Reopening Schools Was Just an Afterthought“

“Trump Turns the U.S. Into an Outcast”

“Never Go Back to the Office”

“Trump Turned the Death Count Into a Story About Himself”

“The U.S. Is Now Resorting to Plan C”

“How to Protect Election Integrity in 2020”

“Volume 1 of Mueller Report: A Users Manual for How to End Our Democracy”

“DHS Used to Guard Against All Hazards” 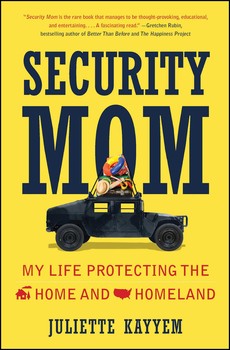