Erica Williams Simon is an award-winning content creator, host, social critic, and entrepreneur. As the founder and former head of Snapchat’s Creator’s Lab, her work is focused on helping a diverse, digital native generation develop wisdom that leads to better lives and a better world. Simon’s work incorporates elements of her multi-industry career at the highest levels of media, social impact, tech, and faith to develop innovative, high impact programs that help people navigate a changing world.

She is now the CEO of Sage House, a content and experience company that creates spaces both online and off for compelling conversations, critical questions, and shared storytelling. She is co-creator of the talk show The Assembly and is also the host of the popular podcast The Call with Erica.

Previously, Simon worked as the creative director of Upworthy.com and as a columnist for TIME.com. Before moving to a career in media, she spent nearly a decade in Washington D.C. working for Bill Clinton’s Chief of Staff at the Center for American Progress and Citizen Engagement Lab developing innovative Millennial engagement programs on key social, civil, and human rights issues. She has advised on projects with diverse partners ranging from the White House and Rock the Vote to Fortune 500 companies. For her social impact work, Simon was named one of Politico’s Top 50 Politicos to Watch, an NAACP’s 40 under 40, a world Economic Forum Global Shaper, and an Aspen Institute Ideas Fellow.

Her first book, You Deserve the Truth, was released in May 2019 and explores how to engage with the dominant cultural narratives of our time to build an authentic life worth living. It chronicles Simon’s own story when, at twenty-seven, she walked away from a high profile career as a rising political star, realizing that the cliché life advice and cultural norms that had shaped her life left her – and much of her generation – frustrated, overwhelmed, and uninspired. Along the way, she became “story smart”, rejecting the lies that society taught her about identity, work, money, love, and more, and instead embracing a new values-driven narrative that has helped her create a life worth living. Part self-help and part social critique, Simon’s book is a blueprint for anyone seeking new way to live.

Simon received the O Magazine Women Rule Leadership Award and has appeared as a guest and commentator on media outlets including CNN, HBO, MTV, PBS, BET, and more. Her work has also been featured in Harvard Business Review, The Washington Post, Huffington Post, and Essence magazine. Simon, a self-proclaimed grown-up preacher’s daughter and church girl for life, resides in Los Angeles and is on the board of NPR Generation Listen.

In this beautifully written, smart and soulful book, Erica Williams Simon gives us what we all need more of: The knowing that life, at its best, is more about wonder than certainty. With You Deserve the Truth, Erica invites us beyond the old stories we’ve been told about ourselves, and into the wonder of our dreams, hopes and love – so we can find our truth and purpose there.”

For a straightforward and honest look under the hood of the human experience, soiled but also blessed by what social media has done to it, Erica Williams Simon’s You Deserve the Truth will act as a roadmap that can feel like an iron fist in a cashmere glove: delicate and warm but unflinching and equable at once. If we are, as she says, all wayfinders, Erica is the closest thing we get to a guide.”

Erica is the girlfriend everyone deserves: full of wisdom, grace and unwavering honesty. You Deserve the Truth is the smart and all too real guidebook for anyone striving to craft an authentic and inspired life from the ground up. Erica’s willingness to share the messy parts of her truth is a needed reminder for the rest of us to live ours.”

— Franchesca Ramsey, author of Well, That Escalated Quickly and host of MTV’s Decoded

Our lives are filled with story; Simon’s book deconstructs her personal stories about fear, dreams, work, money, time, faith, and love… Simon mixes her personal experience with national and global examples of nascent narrative intelligence. Her writing style is readable and engaging, and her message matters.”

[A] gratifying debut… Millennials looking for advice from a perceptive peer will appreciate Simon’s refreshingly blunt take on happiness.”

Erica came to our leadership off-site with the goal of inspiring the team during a time of change. We had her kick off the day, and we are so glad we did! Erica’s insights were invaluable as we spent the day working through roadblocks and developing our mission and values. Throughout the course of the retreat, people regularly referred back to Erica’s talk and specific things she said that helped us as we tackled tough issues!”

“Get to Know Team MR: Erica Williams Simon, Host of The Call” 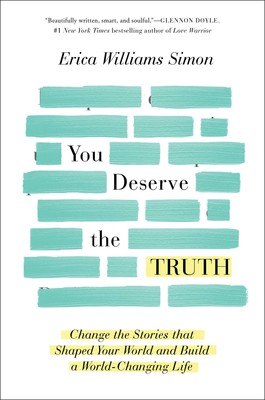